and you’ll open yourself up to more ~

in your life and your relationships.

You think I’m pulling your leg.

Or writing one of those over-promise/under-deliver catchy titles.

You know the sort…

But I actually mean this.

I really want you to know that there is one thing you are probably holding onto in most – if not all – of your moments and that if you released this one idea, this one belief, everything would shift.

But because you don’t know about this one mind-trap you’re caught in you un-knowingly participate in undermining some really important relationships. Relationships that mean a huge amount to you because you want very much to enjoy your ~

but this way of thinking is distorting your view of them.

Before I share this one thing I’m inviting you to release, here’s a personal story about that moment when I first recognized it’s power.

In the mid 1980’s I volunteered for the King Country Crisis Clinic because I was terrified a complete suicidal stranger might randomly phone my number one night and shout:

I’ve got a loaded gun. It’s pointed at my head. Give me one good reason not to pull the trigger.

Sounds like an odd fear, but it was hearing a  BBC news story about exactly this that triggered both my concern, and my decision to learn all I could about working with people “in-extremis”.

So, I approached the King Country Crisis Clinic because I figured they’d have to teach their volunteers to handle calls like that. Folks call a crisis line when they’re homeless; frightened of their abusive partner; lonesome; delusional; drunk; about to be evicted; contemplating an overdose and yes – in the midst of what was called “an active suicide.”

By way of learning, we potential crisis-desk-phone-bank volunteers role played practice calls about all sorts of things, and one night it happened. I picked up the phone and heard:

I’ve got a loaded gun. My wife just left and took the kids. I’m broke, alone and done. I’m going to pull this trigger unless you can think of one good reason I shouldn’t.

In the BBC story I write about, the woman responds simply with “Because I don’t want you to” and I was contemplating giving the same response. But time stood still and after a ridiculously long pause during which – had this been a real call – I’m sure I’d have heard gun shot, a trainer materialized by my side. I leapt up from my seat frantically gesturing that she should role-model how this ought to be done.

She settled in and calmly took the phone. Here’s how it went.

SANDY ~ Brad, I care very much. I really hear there’s a part of you in so much pain right now that you’re ready to pull trigger to end your suffering. And Brad, I also hear that there’s another part – a small part maybe but a part of you none-the-less – who picked up the phone just now to see if there might be one good reason not to pull the trigger. Can I speak with that part Brad? Can I speak to that part of you who wants to talk about reasons to live?

(* Confidentiality is important to have everyone feel safe. Real names do not need to be used.)

Sandy had not frozen in the face of the call because she had not seen Brad as 100% suicidal. And in truth, if he had been, he’d have pulled the trigger and not called the help line.

But that’s the magic folks.

Sandy had released her thought that what was coming out of Brad’s mouth, what Brad was saying to her right then, was “the all of Brad.”

She understood that there might be other parts of Brad who might want to speak up but – because we don’t have that Vulcan mind-meld thing quite down yet – we have to say things in a sequence over time.

While she heard that there was a sad, hopeless part of Brad who had teamed up with his take-action-to-end-the-pain part who held the gun, she also heard a different part. The part in fact who initiated the call because this part was holding on to a sliver of hope.

Dramatic as it may sound – this was one of those life-changing “Ah-Has” for me.

I have gone on to study the idea of multiplicity of the mind in greater depth with particular thanks to Richard Schwartz  and his Internal Family Systems model. As a relationship therapist using this idea with my clients, it’s revolutionized not only how much more fun this inner work is, but also how quickly people can make changes that bring them happiness.

It’s an idea that makes all the difference, and I’ll show you why.  But first I’ll remind you that you probably already think this way sometimes.

in your life and your relationships?

Here are 2 examples of how this looks in practice. 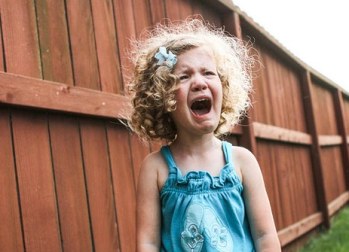 Your child is angry or sad, but definitely emoting.

Before you do anything, remember – think Parts!

And these 3 simple steps.

This is important, because how you show up to your child will impact how she shows up.

What context are you in? This tends to impact who we are in any given moment.

If you’re feeling judged (in a supermarket; by your in-laws) you may notice that part of you who parents for the onlookers more than for your child. Maybe you’ll be tempted so hush your child, handle her a bit roughly to show them you mean business, or to get angry back at your judging audience.

If you are feeling supported (with your spouse or friends with kids) you may notice that part of you who is calm and able to prioritize your child’s needs.

Take a breath and notice, and do your best to choose which part you want to show up with. Calm is clearly preferable!

This is important, because who she is right now will determine who you need to be for her.

What context is she in? What just happened in her world?

What might she be feeling? Jealous? Hurt? Frightened? Lonely? Mad? Frustrated? Kids are complex, but their emotional range when upset tends to reflect one of these feelings. Then say to yourself, “OK, right now, my child is showing me that part of her who feels  [pick one].”

Your job then is not to stop her feeling what she is feeling. Your job is to help her understand and name her experience and help her move on when she is ready. Which could be in 3 seconds, or 30 minutes.

#3  Acknowledge what you see with your child.

“Hummm, I see a little girl who’s got a big frustrated feeling going on right now.” [Guess…. she may even correct you if you’re wrong, depending upon her age and level of emotional understanding]

“Do you know what she needs?”

If you can separate the child from the feeling – as in you see a girl who is experiencing an emotion rather than a girl who is that emotion then she begins early on to recognize she is more than any one emotion. And, in fact, she can experience several different emotions at the same time.

Usually we say something closer to “I see you’re frustrated.” That’s not bad. It’s shorter and less cumbersome. But do you also see how it blurs the distinction and continues to reinforce that all-of-one-mind, less-helpful thinking? 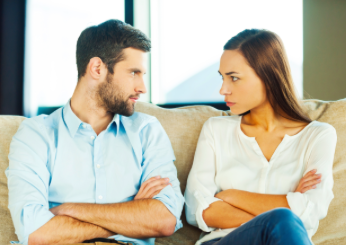 Typically this goes badly. You try and cheer him up. He gets more distant and you both end up grumpy.

Before you do anything, remember – think Parts!

And these 3 simple steps.

This is important, because how you show up to your partner will impact how he shows up.

If you notice parts who feel grumpy, drained, or in need of attention after a tough day, it may be hard to give attention because these parts really want to receive it.

If you’re noticing parts who are impatient or excited to get into your next event, it might be hard to listen to your partner because you’re a twitchy little ferret inside.

Take a breath and notice your choices. You could be honest and let your partner know you’re feeling a bit grumpy and needy too. You can let him know you want to be there for him, but need to go let off steam first and take a run. Or, maybe just noticing these parts will allow them to calm down, and you can listen with neither neediness nor resentment.

Unlike dealing with a child (see above), your spouse can possibly tell you what’s going on. Or, you may know him so well that as soon as you hear him walk down the hall, you think: “Yup, here comes Grumpy!”

Take heart! Remember, he’s not 100% Grumpy. He’s only somewhat Grumpy. And that will make all the difference.

#3  Acknowledge what you see with your partner.

“So – I have this sense that Grumpy’s in. Tough day? I really want to listen to you and, I gotta say, I’ll be a whole lot nicer after a run. I was fit to be tied by lunch and still had to make nice to that irritating off-site manager and do most of Felicity’s work. Would you be up for a nice long de-brief over drinks in 45 minutes?

Might not be Grumpy’s first choice, but you’ve probably reminded your complicated sweetie that he is not 100% grumpy . Which means he might bump into a calmer inner part and be much better company when the two of you meet later.

So – now that you’ve heard my claim, which is that when you let go of your belief that both you and the person you’re communicating with are totally of one mind  you’ll open yourself up to more ~

in your life and your relationships

What parts come up for you?

This is the latest article in a year-long series on the “12-most-important-relationship-skills-no-one-ever-taught-me-in-school-but-I-sure-wish-they-had.” 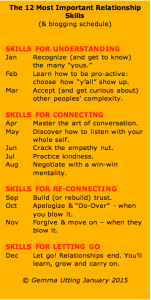 If you’re interested in reading this blog in sequence, below are links to the series to date, beginning with the first posting at the top.

SKILL ONE ~ Recognize (and get to know) the many “yous.”

SKILL TWO ~ Learn how to be pro-active: choose how y’all show up.

SKILL THREE ~ Accept (and get curious about) other peoples’ complexity

SKILL FIVE ~ Learn How To Listen With Your Whole Self

SKILL TEN ~ Apologize & “Do Over” When You’ve Blown It

SKILL ELEVEN ~ Forgive and Move On When They’ve Blown It

5 thoughts on “In This Moment, Let This Go…”